At the Southeast Asia Summit in Washington recently, discussions revolved around supply chain disruptions and the situation in China. The two problems are interlinked by the blockades in Shanghai, a city of 25 million people (the equivalent of Australia’s population) whose economic performance exceeds that of many European countries.

The paralysis of this metropolis in southeast China, as well as other cities in the country, is hampering China’s GDP growth and could be a major problem for the political power that has so far encroached on the zero-tolerance strategy against Covid through authoritarian measures to control the spread.

What are the implications for investors active in Chinese stock markets? Chinese stock markets did not reach most international indices in March and April, sometimes to a large extent, mainly due to difficulties caused by the more contagious but also less dangerous Covid-19 Omicron variants.

Although it is impossible for us to predict the future, we see signs of stabilization, from our point of view from three factors.

The number of new contaminations fell from a peak of around 460,000 per week in early March to less than 100,000. Measures taken under a zero-tolerance policy, which result in more or less severe restrictions, appear to have had the desired effect. Nevertheless, due to Omicron’s high infectivity, we do not think that even the strictest quarantines can completely cover it. Therefore, local restrictions can be expected to continue in the coming months.

Morgan Stanley’s research shows that the number of fully or partially restricted cities has been stable since the end of April, between 40 and 45. Together, these cities account for almost 25% of China’s GDP (see graph 1). The bank also insists on a sharp decline in the number of cities classified as risk areas from 50 in early April to 10. 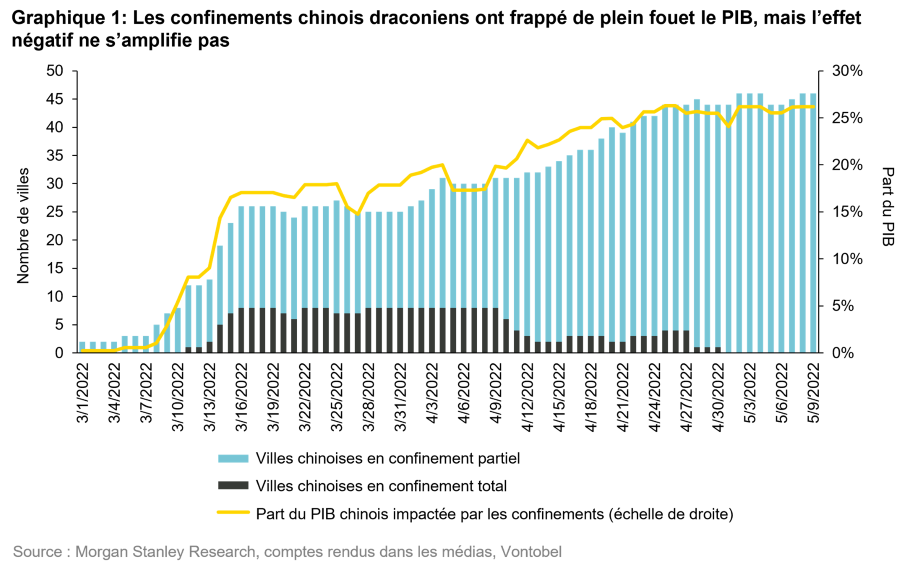 Chinese leaders in a delicate position

The future will largely depend on how the Chinese government manages the health crisis. This will only change if 80% of the vulnerable elderly population will benefit from a complete vaccination schedule, which could be the case in October 2022, according to forecasts based on current vaccinations. According to new scientific studies, the immediate withdrawal of the zero-tolerance policy on Covid could cost up to 1.5 million lives. It is therefore understandable what a delicate position Chinese leaders are in. They have long since declared their victory over the virus, as well as the superiority of their policy of strict restraint over the Western approach to pandemic control. For Beijing, therefore, any sign of a shift would mean a loss of face.

According to local market observers, the Chinese people now seem to accept these severe restrictions for better or worse. Public opinion will be closely monitored before the most important political event of recent years, namely the 20th Congress of the Communist Party, which is scheduled for November, when President Si Jinping is expected to run for the party’s third term. , the first in history to allow him to consolidate his power.

Chinese stocks are rising, but they are still on uncertain ground

How will Chinese stocks fare? It is quite possible that they will again be plagued by a larger wave of contamination. However, as the price-to-earnings ratio, based on a forecast of future 12-month profits, is currently 9.5-fold, which is relatively low and reflects investors’ caution about the outlook for Chinese companies, the potential for further corrections seems limited to us.

However, we think the next steps the government will take to support and stimulate the economy will be crucial. In mid-April, the confirmation of the GDP growth target of 5.5% was well received by the market. The shares also responded favorably to announcements concerning the expansion of urbanization in rural areas, a return to a more normal level of regulatory control of the financial activities of Chinese Internet companies, and the easing of monetary and local stimulus measures to support real estate markets.

The feeling of improvement can also be seen in the performance of individual sectors. Over the course of the month, shares of infrastructure and construction companies, as well as food, utilities and telecommunications companies, picked up, amid large differences in sector performance over the past three months. For example, there is a difference of almost 30% between the most efficient sector (oil and gas) and the most lagging sector (hotels), which proves that, despite the unfavorable economic environment, there are still opportunities to choose stocks.